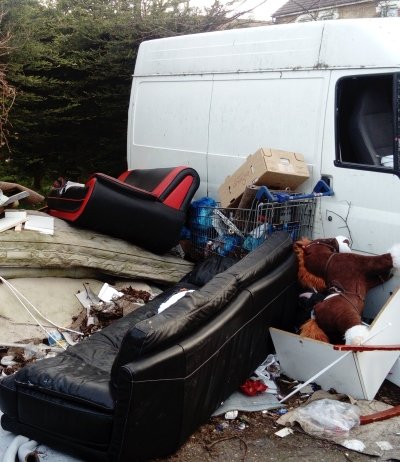 A brazen house clearance fly-tipper has been handed a 12-month prison sentence at Camberwell Green Magistrates’ Court. George Smith (40) was caught not once but three times on film using tipper trucks to dump rubbish in Croydon streets.

Prosecutor Simon Kiely told the court, “Between February 12 and April 11 2016, George Smith committed four fly-tips within the Borough of Croydon. These fly-tips all involved the repeated dumping of large amounts of controlled waste in residential areas, and regularly involved entire loads of waste, both loose and inside plastic or polythene sacks, dumped from the back of a tipper truck.”

Smith had one tipper truck seized by officers from the London Borough of Croydon. But he persisted in his fly-tipping with a second vehicle which was also seized by the council. The council later crushed both vehicles.

Miguel Santes told the court that he had hired Smith to dispose of rubbish, paying him £80 to do so. But when Smith returned to take more rubbish, Santes demanded to see a licence. When Smith was unable to produce one, Santes declined to use his services any longer.

Smith subsequently faced four charges of dumping, one of operating without a licence and a further breach of the Environment Act. He had been filmed dumping in an alleyway running between the backs of houses. The rubbish had included waste timber, builders’ rubble, cookers and broken beds.

In a statement from Croydon Council, deputy leader Councillor Stuart Collins said, “George Smith repeatedly flouted the law and I hope the crushing of his vehicles, along with his jail sentence, serves as a warning to him and to other waste criminals that we will simply not tolerate this behaviour and will not hesitate to exercise our powers to ensure they are brought to justice.”